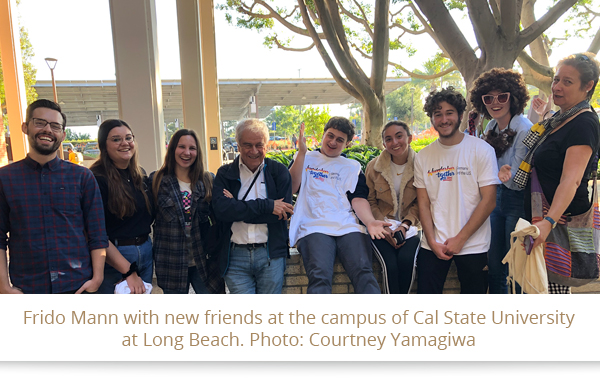 My halt at the campus of Cal State University at Long Beach in the south of Los Angeles was a special day. I was invited by Program Director and Graduate Advisor for German Language and Literature, Dr. Jeffrey L. High, who welcomed me to join his large circle of him enthusiastically following students. The first thing I did was to moderate a debate with those students about the courage for democracy, which took place within the scope of a highly political positioned seminar on Schiller led by Jeff.

After lunch with this class and other students I gave my standard lecture “Democracy will win” in front of an audience of about 90 students and some dropped in high school students. Never before during my lecture journey I noticed such a strong interest and attention for the history of democracy and its actual global endangerment, especially in the USA and in Europe, like I found here. My focus on open dialogue as a counterbalance to the extreme polarization of nowadays, the commitment to a narrowly woven confraternity of all people who fight for a responsible and democratic cooperation – all that was well received!

My remarks on experiental dialogue – originating in the oldest monastic traditions of all religions and kept being practiced in the German Association “Weltkloster” – met with special response. The deepening of dialogic connection by introspectively recognizing the bonds to one’s own religious or other mental attitudes and convictions, especially during a slowing, ruminant silence, and thus the empathic understanding and acceptance of the conversational partner, encouraged by the newly empowered own identity, were well understood. To top it off: This form of dialogue has already found rudimentally its way into the political practice of outstanding statesmen and diplomats (such as for example the legendary First Prime Minister and founding father of Israel, David Ben-Gurion) and can be transferred as best practice to the conversational culture of controversial, factual discussions within the political, cultural and scientific dialogue. A godparent for this development was Martin Buber, the reform-judaistic philosopher of religion, and his principle of I and Thou. Not least I could point out Thomas Mann’s dialogic affinity to the First Unitarian Church of Los Angeles which he realized according to his passionate commitment for humanitarianism and democracy during his American exile.

The first public question of a student in the following discussion was, how one could learn this sort of experiental dialogue. I put straight to her that the issue was not about an exercisable technique of conversation, but about an attitude – a stepping back and backpedaling, and about a basic engagement that has to be engrossed by inner silence. This very attitude could be strengthened by “mindfulness” or yoga, both of which have their roots in old Asian religions and philosophy, but are often handled quiet superficially in the practices of daily life. Those who wished to fathom the topic more deeply, could look for orientation in existing monasteries of any religious affiliation, I concluded.

A first conclusion arose to me: Whatever may further occur in this deeply fractured country, I keep the confidence that America’s democracy will stand this new crisis, after what I experienced here so far. I pin high hopes on America’s young, upgrowing generation, who get themselves heard everywhere louder and louder with their criticism. So much the more I am looking forward to my upcoming east coast sojourn as a fellow at Dartmouth-College in New Hampshire, which is supposed to last ten days and holds ready a number of exciting tasks.

Frido Mann2019-10-20T17:33:22+02:00
We use cookies on our website to give you the most relevant experience by remembering your preferences and repeat visits. By clicking “Accept All”, you consent to the use of ALL the cookies. However, you may visit "Cookie Settings" to provide a controlled consent.
Cookie SettingsAccept All
Manage consent